Edinburgh lays claim to the oldest Jewish community in Scotland. Records of Jews in Edinburgh date back to the seventeenth century, although the first Jews appear to have been Christian converts. Julius Conradus Otto, who held the Chair of Hebrew and Oriental Languages at the University of Edinburgh from 1641, was one such convert who later reverted to Judaism. Conversion to Christianity appears to have been a prerequisite for recognition by the University.

Records reveal that by the 1790s there were a small number of Jews resident in the Canongate area of the city. By 1820 the first recorded synagogue in Scotland had opened on North Richmond Street, serving a community of about one hundred people. Both traders and poorer immigrants continued to arrive in Edinburgh, settling in Leith, The Pleasance, and in the Nicolson Street area.

The assassination of Tsar Alexander II of Russia in 1881 triggered a period of pogroms across Eastern Europe into the 1900s, resulting in mass emigration. Improvements in communications and the reduction of the cost of transport also aided economic migrants to leave impoverished conditions for a new life.

Between 1881 and 1914, almost three million Jews – one in every three – left their homes, emigrating mainly to the USA. More than 120,000 Jews came to the UK. Significant numbers settled in Edinburgh.

After World War I, immigration reduced, never again reaching the levels experienced between 1882 and 1914. The birth rate amongst resident Jews also fell and the trend increased for young Edinburgh-born Jews to leave the city for other British urban centres as well as for the United States, Canada, Australia and Israel. By 1949, the community had declined in number to around 1,500 individuals and is still decreasing today. However, following World War II, the remaining community as a whole was more settled in the city and marginally financially better off. 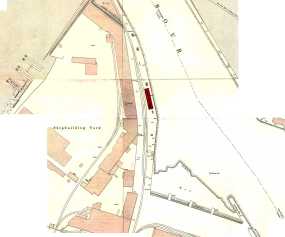 Waiting Room and Booking Office marked on OS 1893 map of Leith Docks. Click on the icon lower left to explore at full resolution.

Elias Fürst (Latvia 1873 – Edinburgh 1949) (pictured lower left) was appointed, at the young age of thirty-nine, as Chairman of Hearts Football Club. He was the first Hearts official to be elected as Chairman of the Scottish Football League. Elias’ passion for football began when his father Rev. Jacob Fürst, Rabbi to the Edinburgh Hebrew Congregation, took him to matches on Shabbat (the Sabbath), a sign that Jacob Fürst was keen to ensure his children were accepted into Edinburgh life. By the time Hearts won the Scottish Cup in 1906, Elias was held in sufficient regard by the club to be allowed to display the trophy in the window of his jewellers’ shop at 45 South Bridge. For all his success, it was apparent that Fürst never managed to shed his outsider status. Courtesy of Heart of Midlothian FC Archive

Sir Malcolm Rifkind KCMG, QC, MP (Edinburgh 1946 – ) is a British Conservative Party politician who served as a cabinet minister under Prime Ministers Margaret Thatcher and John Major, becoming Secretary of State for Scotland in 1986, Defence Secretary in 1992 and Foreign Secretary, 1995 – 1997. Rifkind was educated at George Watson’s College and the University of Edinburgh, where he studied Law and then Political Science. He served as a local councillor in Edinburgh between 1970 and 1974, before being elected MP for Edinburgh Pentlands, which he represented until 1997. He currently serves as the Chairman of the Intelligence and Security Committee, and is MP for the London constituency of Kensington. (Image courtesy of Sir Malcolm Rifkind)

Dame Muriel Spark (Edinburgh 1918 – Florence 2006) was born Muriel Sarah Camberg and brought up in the Bruntsfield area of Edinburgh. Her parents were Jewish, although her mother was raised as a Presbyterian. She taught English, was employed as a secretary in a Princes Street department store, and during World War II worked for MI6. It was not until the end of the war that she formally embarked on her literary career. Spark’s first novel, The Comforters, was published in 1957, whilst her most well known work, The Prime of Miss Jean Brodie, followed four years later. She received numerous awards during her career. A review of her collected short stories in The Scotsman newspaper in 2001 described them as “one of the greatest collections of short fiction in English.” (Image courtesy of the London Evening Standard) 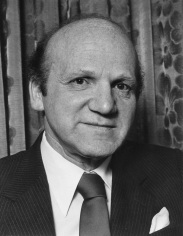 Professor Sir Abraham Goldberg Kt, MB, ChB, MD (Edinburgh), DSc (Glasgow), FRCPGlas, FRCPE, FRCP, FFPM (Edinburgh 1923 – Edinburgh 2007) was born to a Lithuanian father – a travelling salesman and a Ukrainian mother – a fine seamstress. From these humble beginnings, he became a world authority on porphyria and an expert on lead poisoning, the latter influencing the implementation of a safe water supply for Glasgow. Goldberg studied medicine at the University of Edinburgh before conscription into the Royal Army Medical Corps took him to Egypt. In 1956 Goldberg was awarded the gold medal for his MD thesis on porphyria by the University of Edinburgh and in 1957 he began his career in medicine at Glasgow University where he remained until retirement. Publishing more than 250 papers, Goldberg’s sustained academic output was rewarded with his appointment to the Regius Chair of the Practice of Medicine, Glasgow University in 1978. He was made a Fellow of the Royal Society of Edinburgh, was chairman of the Committee on Safety of Medicines (CSM) in London and of the Biomedical Research Committee of the Chief Scientists Office (Scottish Home and Health Department). In 1983 he received a knighthood for his many services to medicine. Goldberg also spent a considerable amount of time teaching, inspiring further generations of doctors and researchers. Abe, as he was known to family, friends and colleagues, gave generously of his time in charitable works, including as a member of the Council of Christians and Jews. (Image courtesy of Professor Richard Goldberg)

The Right Honourable Lady Hazel Cosgrove, CBE née Aronson (Glasgow 1946 – ) is a Scottish lawyer. She was the first female judge to be appointed in Scotland, having served as Sheriff in Glasgow (1979 – 83) and in Edinburgh (1983 – 96). She graduated from Glasgow University in 1966 and was admitted to the Faculty of Advocates in 1968. In February 2003, Hazel Cosgrove was appointed to the Inner House of the Court of Session and sworn of Her Majesty’s Privy Council. She received a CBE in 2004 for services to the criminal justice system in Scotland and has also been awarded honorary degrees from a number of institutions. She currently divides her time between London, Edinburgh and Israel. (Image: David Reid, Lady Cosgrove, courtesy of the artist)

Dr Ruth Adler née Oppenheimer (Ilfracombe, Devon 1944 – Edinburgh 1994) was the first Scottish Development Officer for Amnesty International. Born to parents who came to Britain as refugees from Nazi Germany in 1934, Ruth studied Philosophy, Politics and Economics at Somerville College, Oxford, and obtained a doctorate in Jurisprudence from the University of Edinburgh. Her thesis was published as a book entitled Taking Juvenile Justice Seriously. She was one of the founders of Scottish Women’s Aid and the Scottish Child Law Centre, a member of the Children’s Panel for many years and then a Justice of the Peace. The Ruth Adler Lecture on Human Rights, established in her memory, is given every year in the School of Law at the University of Edinburgh. Ruth was very proud of her Jewish heritage and deeply committed to her adopted country, Scotland. She translated several scholarly books from German into English, was editor of the Edinburgh Star and President of the Edinburgh Jewish Literary Society. Ruth was married to Michael Adler for twenty-seven years and had two sons, Jonathan and Benjamin. (Image courtesy of Professor Michael Adler)

Julius Conradus Otto, who held the Chair of Hebrew and Oriental Languages at the University of Edinburgh from 1641. (Image courtesy of the Jewish Museum London)